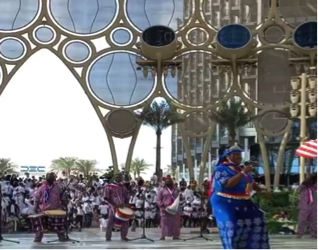 Ambassador Juli Endee and team have been showcasing Liberia’s tourism investment opportunities to investors by splendid display of cultural performance in Dubai. Liberia’s Culture Ambassador said of the many places she has traveled to perform; Dubai was the biggest of all. She said showcasing Liberia’s culture in the UAE was a stage of opportunity for young artists in Liberia.

Ambassador Julie Endee, who heads the country’s team of cultural and musical artists attending the world event, Expo-2020, says Liberia’s participation is “not about dancing and music” alone. Instead, it  is alsot “making statements about who we are as a people and what we bring to the table”.

The Culture Ambassador, in a very excited mood, thanked President Weah who she said did not travel to Dubai in person, but has nonetheless provided enormous support to ensure Liberia’s participation is a resounding success. “Before traveling here in Dubai, we went to President Weah for blessing and because of his blessing, we were able to perform excellently”, Ambassador Endee said.

The periodic world fair, taking place this year in Dubai, the UAE, runs from October 1, 2021 to March 31, 2022. It provides an opportunity for countries to showcase their unique potential through displays of their cultural heritage, innovation, business opportunities and general way of life. It’s being held under the theme, “Connecting Minds, Creating the Future”.

Organizers say bringing the world together can serve as a catalyst for the “exchange of new perspectives and inspire action to deliver real-life solutions to real-world challenges”.

This year, 192 “pavilions” representing the total number of countries have been set up to feature each country’s story. In addition to featuring Liberia’s arts and craft, the country will also be exhibiting its potential in ecotourism, infrastructure, mining, Agriculture, etc.

Artifacts of more than a hundred years, which convey the story of the Liberia’s forefathers, will be on display, as will the account of President George M. Weah’s humble beginning.

The official Liberian delegation, headed by the Minister of State Without Portfolio, Trokon Kpui, held a major investment forum on the sidelines of the event with the Dubai Chamber of Commerce. About 60 investors from the UAE met with officials of the Liberian government and private business people from various sectors.

Tuesday, November 30, was set aside as “Liberia Day” at the Expo.

“We showcased Freedom, and our Cultural Heritage’, Ambassador Endee said.

The Gender Boss is expected to roll out Liberia’s transformative approach in uplifting women as well as outlining insidious challenges most Liberian women go through daily.

“Minister Tarr will highlight amongst others the significance of Liberia passing into law of the Domestic Violence Act of 2019; the surge in appointment of women into key Cabinet positions; the declaration of free Education in all public schools that has seen the rise in enrollment and retention of girls; the creation of Gender and Social Inclusion Units in various Ministries and Agencies that is currently blustering gender mainstreaming in the formulation and implementation of government policies and programs; the decline in the number of reported sexual and gender-based violence cases which can be attributed to the launch of the Anti Sexual and Gender Based Violence Roadmap 2020-2022 and Rural Social Cash Program which is reducing poverty by directly giving cash to households that are mainly headed by women”, Gender Ministry release said.

The release said, the Gender Minister would also touch on the firmed commitment and unflinching support from the Feminist-In-Chief H.E. Dr. George Manneh Weah in achieving Gender Equality, which is the fulcrum of the Sustainable Development Goal #5.

Additionally, she will share the Liberian Leader’s insistence that Gender Equality, which is a subset of the Pro Poor Agenda for Prosperity and Development (PAPD), Pillar One, should be mainstreamed and prioritized by all government Institutions.

The organizers assert that the Expo principles are aligned perfectly with the values of the UAE, and with millions of visitors expected both on-site and online, the event will provide a unique opportunity to design and deliver a meaningful programme that accelerates the UAE’s collective progress.

Gender, Children and Social Protection Minister Williametta E. Saydee-Tarr is being accompanied by her Deputy Minister for Research, Planning and Policy – Hassan Karneh and Assistant Minister for Administration, Mamensie Kabba.