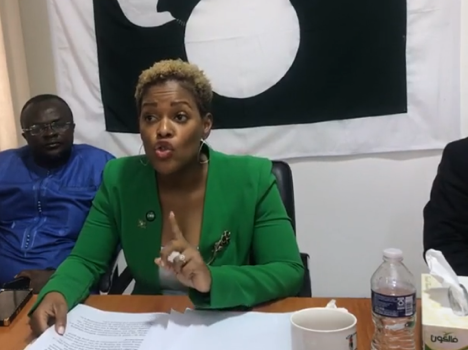 Attorney Charlyne Brumskine, daughter of the late Cllr. Charles Walker Brumskine, former founder and leader of the Liberty Party (LP) has cautioned partisans that unless they reconcile as a Party, they will be useless to the Liberian Society.

She made these statements during a press conference on Tuesday, December 21, 2021 at her Office in Congo Town when.

“We are nothing until we are ONE. If we continue to fight like this, we are of service to NO ONE, certainly not any other political institution, and definitely of no use to the country.  The masses are looking up to us! Our country needs strong political institutions as the prop for good governance,” she said.

According to Atty. Brumskine there is a reason for which her father, Cllr. Brumskine and the founding members of the party named reconciliation as the first pillar of the party, emphasizing that reconciliation is simply the action of making one view or belief compatible with another which is simple and necessary.

She stressed that this is the time for reconciliation within the party adding, “This is time to put Liberia and Liberty Party first.  There were times when my father faced tremendous opposition, even from within his own Party.  There were some who betrayed him, who left him, who lied on him but in the end; he always put those hard feelings aside. In the end he always chose reconciliation. That was what Liberty Party was about the greater good not about personal interest,” she calls on partisans.

Speaking further on the wrangling within the party, Atty. Brumskine said that she cannot she speak to reconciliation without speaking of the rule of law because reconciliation and rule of law are siblings and they are inextricable components for a healthy civil society.

“This is what Charles Brumskine stood for. In 2017, when my father was faced with one of the most difficult stages of his political career when he challenged the election results, ultimately to his detriment, he told his supporters that they must adhere to the rule of law. It did not benefit him, but he respected it. The man embodied the rule of law. He did not suffer compromises and petit corruption at any level in this institution. Brumskine saw LP as his family. And nothing was more important to him than family.  Brumskine did not come from much money; he built LP from his earnings as a lawyer. He was not a millionaire, far from it.  But people flocked to LP because they saw something different about that institution, something they had not seen before.  They saw an institution being led by someone who had strong values and principles and never compromised such, not for money, not for recognition, not even for the Presidency,” she said.

She noted that although the public saw her as being silent but she have continuously been engaging the leadership and stakeholders of the party behind the scene.

She admitted that she have remained publicly silent because she wanted to respect the role of the leaders in the Party and her hope was that the leadership would resolve the issues of the Party and never allow it to get to this point but now her public silence no longer benefits the partisans of LP.

“When I leave here today, I may have lost brothers and sisters, but I have retained my conviction, my values and what I believe my father would have called me to do.  There may be some that will say I did not come across strong enough condemning one side or the other for what has happened.  But do I say it was right to endorse another CPP candidate in the middle of an internal crisis? Do I say it was right to nullify the 2021 special convention that brought in the current leadership? Or do I say it was right to suspend the Political Leader for non-payment of dues? Where is the right? What side must I fall on”, she said.

Meanwhile, the daughter of the late Cllr. Brumskine revealed that she choose to fall on no side but instead choose to STAND on the side of LP which she said is the right side because she chose to stand with the principles and values that party was built on as such she chose to stand with the masses who are despairingly watching what is being played out in the public arena.

Accordingly, she said LP is the institution with some of the most patriotic, compassionate and brilliant young people and the institution that consistently provided constructive criticism and alternatives to the Unity Party Government during the former administration emphasizing that the LP pushed for better electoral mechanisms in 2017 and it has 4 current senators, from 3 of the largest counties and for the past few years it is the only Party to proudly produce a female senator.

She called on LP partisans to come together under the rule of law and reconcile because it speaks to the strength and the passion of the Party.

She noted, “The time is far spent! Liberia is on the brink of a new dawn.  May History judge Liberty Party and its leaders as being one of the conduits to the new dawn?  May we strengthen ourselves so that we may reach across the aisle to our sister parties within the CPP as well as the ruling establishment to provide options, ideas, policies for the new Liberia”.

She recommended that in order to truly reconcile, rebuild, reform and recover LP it is important that party constitute a council of elders comprising of no more than 7 persons, to engage the leadership of the party to find a means of making all views compatible and to help find a way forward.

Atty. Brumskine said the LP was founded as an alternative to the status quo and her father believed in economic equality for and the idea of Liberianization and protectionism of certain industries in the country for the betterment of Liberians for which he created a political institution that would also prioritize the basic needs of the Liberian people, stating that it is time to do what she believes is the right thing and speak to the internal wrangling of Liberty Party.

She said her intent is to evoke the memory and the legacy of the man whose sacrifices gave birth to LP and to ask the question what would Charles Brumskine do in a time such as this.

She said the reason for keeping silent during a time of intense and extreme time is because when her father died in 2019, she knew that there would be an immediate scramble for leadership in the Party and she also knew that as the closest person to him politically and personally she would be an immediate target for those who would want to reduce and remove any remnants of Brumskine in the Party and take it in a new direction therefore she knew that she would be an immediate consideration for leadership for those who wanted to continue a Brumskine legacy and at that time she was in a place of deep mourning so she decided and verbalized loudly to everyone that her Father had left a structure in place and that she did not intend to vie for Chairmanship or the Political Leadership of the Party.

According to her, the vulnerability of LP after losing its vision bearer, had already begun to show in 2019 and there were many who wanted to oust the current leadership and even move the political leader why many wanted to keep the current leadership and her goal at that time was simply to sit at the table and to hold LP together for continuity of the values and principles that her father had established because of the sacrifices that so many people had made for the Party.

She said it was agreed that all positions would be up for grabs except the political leader position. “While I did not oppose the amendment to the constitution, I was vehemently opposed to the election of new officers.  I argued that the officers who were elected during Cllr. Brumskine’s leadership still enjoyed the confidence of the Party and the legal right of their tenure and term.  I saw the arbitrary decision to elect new officers in 2020 as an unnecessary unraveling of a system that was intact, a system left by Charles Brumskine that did not need to be changed in less than one year after his death.   Charles Brumskine had taught me that an institution is only as strong as its governance system”.

When we begin to arbitrarily, without justification, remove leaders from their elected position, we have compromised the integrity of the institution and the foundations of the rule of law.  When that is done the institution ceases to be credible.  Brumskine believed in credible institutions! Brumskine spent a vast majority of his time in opposition building Liberty Party to be an institution of honesty and integrity

“I want AFELL help me with my case to court”