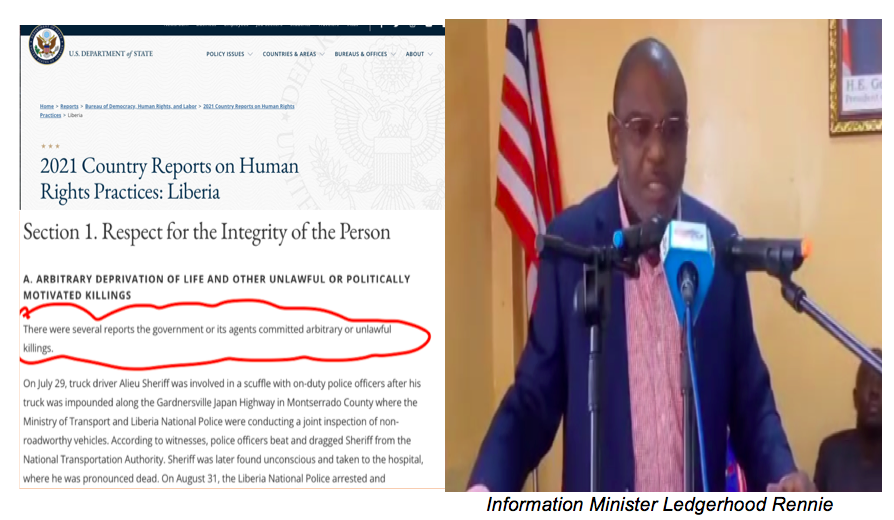 At the government’s regular press briefing on Thursday, April 14, 2022, the Minister of Information, Culture Affairs, and Tourism (MICAT) criticized Womenvoices Newspaper for what it called sensational and misleading headlines.

“US State Department Releases Damaging Report on Liberia: Says Government Commits Arbitrary Killings and Uses the National Budget as a Tool for Corruption,” read the front-page headline story in Womenvoices on Wednesday, April 13, 2022. The Paper said it didn’t manufacture the story as alleged by the government’s spokesman.

According to the newspaper, when Minister Ledgerhood Julius Rennie addressed the public, he stated that the government or its agents were not accused of arbitrary killings in the US State Department Human Rights Report. Womenvoices Newspaper was challenged by the Minister to show the section of the report accusing the government of arbitrary murders.

The Minister, Rennie, rebutted his previous comments by implying that the police officers were public bureaucrats acting arbitrarily while on job.

The US State Department released its customary yearly human rights report on 198 nations, including Liberia, on Tuesday, April 12, 2022. There were multiple reports that the government or its agents perpetrated arbitrary or unlawful killings, according to section 1 of the report, which was titled “Respect for the Integrity of the Person: Arbitrary Deprivation of Life and Other Unlawful or Politically Motivated Killings.”

“Section 1. Respect for the Integrity of the Person: Arbitrary Deprivation of Life and Other Unlawful or Politically Motivated Killings. There were several reports that the government or its agents committed arbitrary or unlawful killings,” the report said.

According to the report, three Liberian government operatives battered and dragged a truck driver named Alieu Sheriff, who became unconscious and was subsequently pronounced dead at the hospital.

In response to the information minister, Womenvoices stated that it did not fabricate the tale but rather reported what was said in the report. According to the newspaper, Minister Rennie should understand when government officials, such as police officers on duty, are acting on orders from the government. Minister Rennie, who, the Deputy Minister of Public Affairs, Jarlawah Tonpo, said is lecturing on mass communication at the University of Liberia, has to grasp that government is a framework that operates via agents rather than by itself.

Though authorities of government took action to prosecute the three police officers, the paper further argues that it doesn’t negate the fact that the incident did occur and that the agents were executing government’s actions.

According to the US State Department Human Rights Report, truck driver Alieu Sheriff was involved in a scuffle with on-duty police officers on July 29 after his truck was impounded along the Gardnerville Japan Highway in Montserrado County, where the Ministry of Transport and the Liberia National Police were conducting a joint inspection of non-roadworthy vehicles. Mr. Sheriff was beaten and pulled from the National Transit Authority, according to eyewitness testimony in the report. According to the story, Victim Sheriff was found unconscious and rushed to the hospital, where he was subsequently pronounced dead.

“On July 29, truck driver Alieu Sheriff was involved in a scuffle with on-duty police officers after his truck was impounded along the Gardnerville Japan Highway in Montserrado County, where the Ministry of Transport and Liberia National Police were conducting a joint inspection of non-roadworthy vehicles. According to witnesses, police officers beat and dragged the sheriff from the National Transportation Authority. The sheriff was later found unconscious and taken to the hospital, where he was pronounced dead,” the report indicated.”

Meanwhile, despite its negative impact on Liberia’s image, the Liberian government has praised the US State Department’s Human Rights Report on the country, calling it a “significant improvement.”

The US Human Rights Report is a metric that many investors use to make investment decisions all over the world. The Liberian government has made no meaningful efforts to improve its human rights record since its founding. As a result, no major investment has been attracted to the country.

The report also claimed that government officials were utilizing the national budget as a weapon for corruption to transfer public funds to their personal use, in addition to charging the government or its agents of arbitrary or unlawful executions. The judiciary is said to be corrupt, and the government has done little to combat gender-based violence, according to the report.