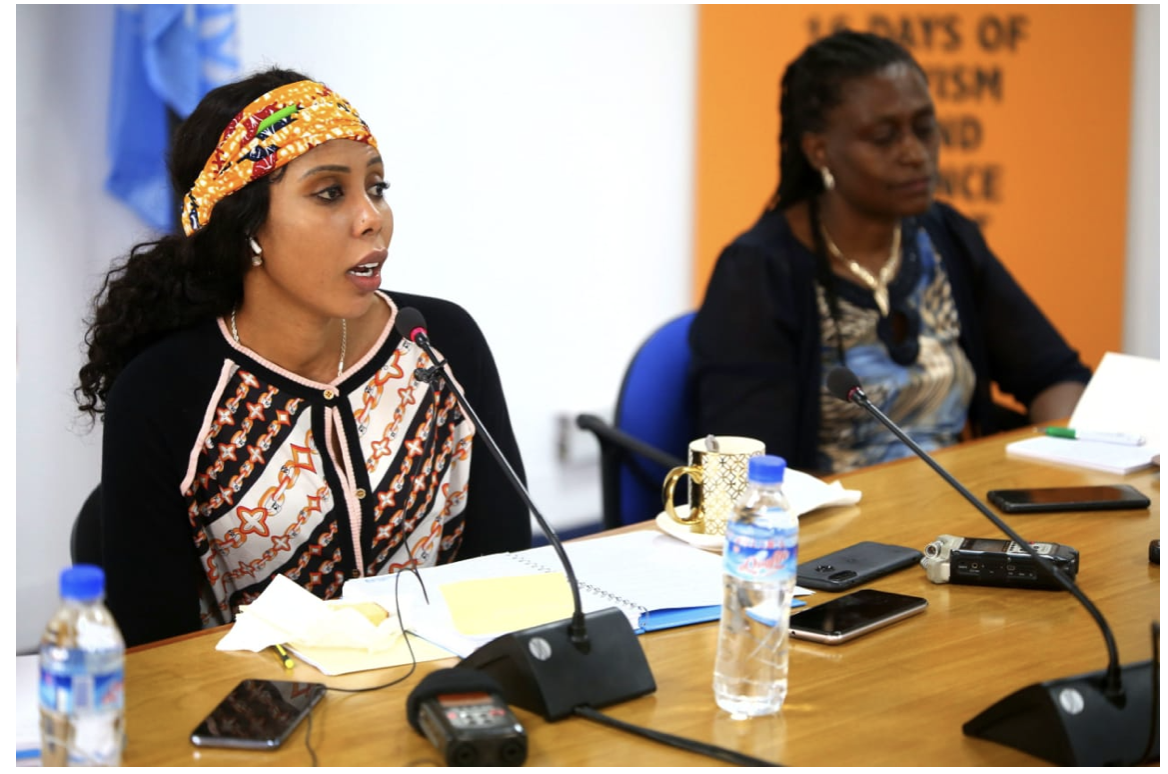 As she endeavors to add support to eliminate FGM in Liberia, the UN Women Goodwill Ambassador for Africa on Female Genital Mutilation (FGM) and Child Marriage, Ms. Jaha Dukureh, has called on the Liberian legislature to act swiftly in crafting laws against female genital mutilation.

Addressing a news conference on Monday, November 21, 2022, Ms. Jaha Dukureh called on the Legislature to act against the dreadful practice, stressing that they needed to understand that Liberia didn’t have time to wait until FGM got beyond its control.

“This is about the lives of young women, and it’s very important that the legislature understand that we don’t have time to wait on these things,”  she elaborated.

She believes the lawmakers have been mute over the period due to fear of losing their votes from within their respective counties and districts.

“Politicians don’t want to move because they are worried about losing votes.”

“It’s very important that the lawmakers understand that they need to act; they can’t keep delaying this because of political reasons,”  Ms. Jaha Dukureh asserted.

Liberia is one of three West African countries that has not yet made female genital mutation (FGM) illegal. FGM refers to the partial or complete removal of external female genitalia or other harm to the female genital organs for non-medical reasons. U.N. Women Liberia says that FGM is a violation of the human rights of girls and women and that it is very bad for health.

If the government of Liberia is willing to pass, the UN women are committed to initiating empowerment programs for the traditional women.

However, she encouraged advocates and the media to mobilize and demand that action be taken by the Legislature and make consultations with the communities that FGM is being practiced in to understand how the laws will be of essence to them if they are passed.

The UN Women Goodwill Ambassador for Africa on female genital mutilation (FGM) and child marriage is expected to meet with members of the national legislature today, Tuesday, November 22, 2022, to brief them on her visit to Liberia and ways forward in ending FGM in Liberia.

Meanwhile, she further noted that if laws are to be made by the legislature, it’s important that the government fully commit itself to the implementation and actualization of said decisions.

Like many other African countries, Ms. Jaha Dukureh said Liberia has beautiful local and international laws that it signed up to, but the controversial issue has always been about the implementation.

She said the African governments’ failure to implement the laws and protocols they have signed up to is a failure for girls across the continent.

“We have beautiful laws and we signed everything, but the issue is implementation; it’s one thing for the government of Liberia to say that they have imposed a three-year ban along with the traditional council, but if it’s not being implemented and FGM is still happening behind closed doors, we are failing girls in this country, and we continue to fail girls in many other countries on this continent by not implementing the laws that we have signed.”

In 2018, President Ellen Johnson Sirleaf of Liberia signed the Domestic Violence Bill, an executive order that banned FGM performed on girls younger than 18 years old, but the criminalization of FGM was limited to one year and expired in February 2019. The executive order did little to address the role community leaders play in perpetrating this crime. It also failed to change the immense social pressure placed on girls to undergo these treatments. For these reasons, female genital mutilation in Liberia continues to be an issue.

Moreover, she said Liberia can end FGM if it’s effortlessly confronted by the government and the citizens of Liberia.

“I think this is an opportunity for Liberia to be a model for other African countries because, personally, based on what I have seen here, I think Liberia can end FGM. We just need to replace some of the harmful practices with more positive ones,”  she said.

She suggested that initiation without mutilation be used instead of some of the harmful practices.

“Africa has beautiful culture and traditions, and it would be nearly impossible for us to come into communities and tell people that they should abandon their traditional beliefs because that will not happen in a place like Liberia, but if you tell them to close down the bush-hoods entirely, there’s a huge possibility that you will never be able to accomplish that, but one way you can work with some of those traditional practitioners is by actually allowing them to keep the position.”

She said progress has been made through joint efforts from the Gender Ministry and UN Women, but more needs to be done to eliminate FGM in Liberia.

Ms. Dukureh hails from the Gambia, and she’s also a survivor of both FGM and child marriage. In February 2018, she was appointed UN Women Goodwill Ambassador for Africa to support regional and global advocacy efforts to end FGM and child marriage. Alongside women’s organizations and civil society, she contributed to the Gambian government’s ban on FGM in 2015 after youth mobilization and campaigning in the country.

She also contributed to an investigation on FGM in the USA by former President Obama’s administration and the subsequent Summit to End FGM at the United States Institute of Peace.

Ms. Dukureh’s visit will continue with the start of the 16 Days of Activism Against Gender-Based Violence campaign, which will be observed from November 25 to December 10, under the global theme “Unite, Activism to End Violence Against Women and Girls” and the national theme “With one voice, let us unite to end violence against women, girls, and children.”

Mass exodus of Dillon’s staffers; has “The Light” burst?