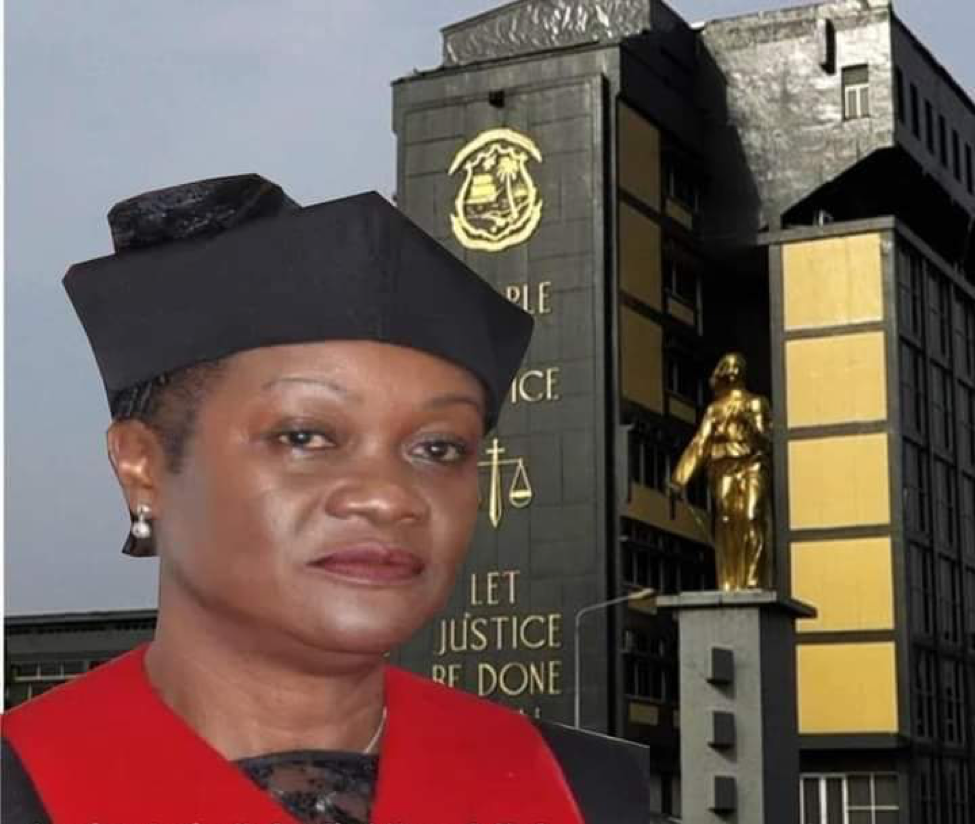 The newly appointed Chief Justice of the Supreme Court of Liberia, Justice Sie-A-Nyene G. Yuoh has promised a robust judiciary under her administration, saying that her administration will hold no allegiance to any authority other than the principal of law, assuring Liberians that she will concordantly render opinion timely and expediently.

Justice Yuoh said that her administration will be strong and consistent in how it follows the law, just like former English Chief Justice John Marshall, who knelt before the monarch and stood up after taking his oath of office to show that he was loyal only to the rule of law.

“As the former chief justice of England, who kneeled before the throne of the king when taking oaths in obedience to the king. But, when he had taken his oath as to the administration of the law, he rose from his bed and stood up before the king to demonstrate that he held no allegiance to the monarch or anyone except his law, the written law, and his conscience.

She stated that her steadfast commitment to upholding the constitutional principle of due process ensures all citizens’ and residents’ rights, adding that they are determined to discourage filibustering by lawyers and clients determined to delay cases in their court through unnecessary legal technicalities in order to frustrate the end result of justice.

“We will make sure that justice is provided to all pursuant to article 11a and b. As a consequence of this, I will resolve to not only hear the human rights cases but to concurrently render an opinion timely and expediently. “As we set this premise, we expect all trial judges will gradually follow our examples.” As Justice Yuoh noted.

President George Weah, members of the Liberian Senate, including Grand Kru County Senator Albert Chie, Speaker of the House of Representatives Bhofal Chamber, members of the diplomatic code, and a number of lawyers attended the event.

However, at the program, which was held in the chamber of the Supreme Court, Chief Justice Yuoh urged judges and magistrates to attach motions to the judicial carnal, particularly carnal 5, which states that ‘’the court is the last place of hope for man on earth,” adding that when party litigants appear before judges and magistrates in respective courts, they bear the anticipation that their rights will be at speed and justice will prevail irrespective of the person involved.

She said that even though she thinks that not giving the judiciary enough support hurts the rule of law, peace, and security of the republic, these problems shouldn’t stop judicial officers from doing their code duty.

In this regard, her colleague on the bench, with whom she has worked with over time, has agreed in principal to forester an unprecedented process in tackling these challenges, adding that they have agreed to build strong coordination between the Supreme Court and the other two branches of government.

“We have agreed to maintain a vibrant network between the Bench and the Liberia National Bar Association and have resolved to implement judicial policy that will make the working of the court both decision, visible, and appreciated by the citizens and residence,” Justice Yuoh disclosed

The third female chief justice said that the most important part of all of this is that she will decide to not only hear human rights cases, but also make decisions about them quickly and in a timely manner. She said that as they set this example, they hope that all trial judges will eventually follow their lead.

“My colleague and I are in agreement that all of these concerted efforts mentioned above will find the fire of hope in our people. We are mindful that this Supreme Court is the last place of hope and, as such we are resolved to reposition our post to a judicial status that will not only be highly respected, but will bear the spite and changes of our modern society,’’ she noted.

In her speech, Justice Yuoh said that they will work with the Liberia National Bar Association (LNBA) and the fourth estate to create a judicial policy that explains in simple terms the culture of repose in the justice system. This is to get rid of the cloud of confusion, false immersion, and vision criticism that is clouding the image of the judiciary.

She said that she is open to criticism that is helpful and that they are going to do justice without fear or favor, as the Liberian Constitution says in Article 11 b and c.

Over 100 Women To Get Cancer Treatments