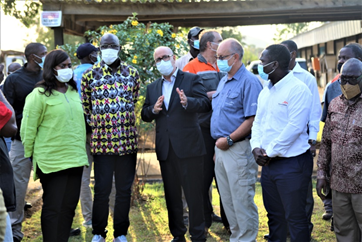 In a statement release Thursday, ArcelorMittal Liberia says it was honoured to host a visit from Liberian President, George M. Weah, senior ministers and other government officials.

According the ArcelorMittal statement, the visit was held in the Company’s concession area of Yekepa, Nimba County, as part of the Liberian leader’s on-going six-county tour. The President and entourage were warmly received by the company’s management and staff, including students of the ArcelorMittal Liberia School System and residents of the township of Yekepa.

Earlier in the day, ArcelorMittal Liberia’s CEO Scott Lowe joined H.E. President George Weah to break ground for the construction of the new G.W. Harley Government Hospital, in Sehyikimpa, Sanniquellie Mah-District. Mr Lowe said that the company would be undertaking essential repairs at the existing Sanniquellie hospital and making a contribution to the relocation of the new facility.

During the Yekepa visit, high-level talks were held between the President, ministers and other senior officials of government and the Company. During the meeting ArcelorMittal-Liberia CEO spoke with President Weah about the strong partnership that exists between Liberia and ArcelorMittal Liberia (AML), the Company’s commitment to the country, demonstrated by its long-term presence and plans to increase its investment.

Briefing the President on the ArcelorMittal Liberia expansion plans, CEO Lowe highlighted the many immediate and long-term economic benefits of the project including jobs, government revenue, and support for local communities.

After meeting with the CEO of ArcelorMittal Liberia, President Weah visited the company’s state-of-the-art Vocational Training Center (VTC) in Yekepa, where he emphasized the importance of technical and vocational education for the youth of Liberia.

Interacting with students at the Center, President Weah congratulated them and wished them the best, emphasizing how important it is for the country to have experts in the various technical fields.

At the conclusion of the meeting, CEO Scott Lowe thanked President Weah and the Government for the visit to the concession and said it reflects the valued partnership between the company and Liberia.

“He does not sleep out”