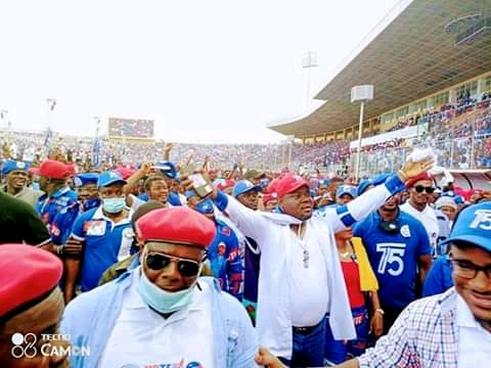 PAYNESVILLE – Liberian president and first partisan of the ruling Congress for Democratic Change (CDC), George Manneh Weahhas rallied partisans and supporters of the CDC to do all within their power to recapture vote-rich Montserrado County in the ensuing 8 December special senatorial election.

Liberians are poised to go to the polls across the country, to elect 15 lawmakers in the December pending senatorial election.

President Weah told throngs of CDC partisans and supporters Saturday, at the official campaign launch of the party’s Montserrado County senatorial candidate, Thomas Fallah (T-5), that Montserrado is the political home for the party, insisting that the vote-rich county must be recaptured from the opposition.

Opposition senator Abe Darius Dillon currently occupies the contested Montserrado seat at the Liberian Senate, having won a landslide vote, even breaking President Weah’s record when he ran for the Senate in Montserrado in 2014. Dillon won 102,549 votes accounting for 55.74 percent in the 2019 Senate by-election with more contestants in the race than Weah’s 2014 record number of 99,226 votes translating into 78 percent.

Political pundits are of the view that Dillon’s 2019 victory in Montserrado, a place regarded in successive elections as the CDC’s stronghold, dealt the ruling party a heavy political blow, as far as its quest for supremacy and dominance in the vote-rich county is concerned.

Ever since Dillon was elected, the ruling CDC has not rested in its drive to recalibrate aimed at reclaiming the lost senate seat, the pending 8 December election being no exception. Although political commentators described such venture by the CDC as a daunting task, considering the situations that triggered what they called many “protest votes” to have gone Dillon’s way in the 2019 election, are still staring the CDC-led government in the face, with little or no solution in some instances.

President Weah used the glamorous event hosted at the Samuel K. Doe Sports Complex in Paynesville City, to call on disenchanted CDC partisans who he said may have left the Party over issues they may be dissatisfied with, to return, emphasizing that there is nowhere like home .

The CDC political leader told his chanting supporters including those who once left the Party over internal wrangling but have since returned to base, that there is joy, love and unity within the CDC.

He expressed gratitude to two ex-soccer stars; former midfield maestro Kelvin Sebwe, and former ace goaltender Pewue Batsman for joining the ruling party, with the Liberian leader asserting that the CDC is a place of love and unity. Both ex-players have in time past opposed Weah’s candidature in successive elections, with Kelvin, along with other former players of the national senior male soccer team, the Lone Star, particularly being on record for among others stating that Weah was unfit to lead the country.

Weah also called on supporters and partisans of the CDC to vote the party’s candidate, Frank Saah Foko, for the Montserrado County District #9 by-election which is also slated on 8 December

Weah noted by voting Foko, the Party would have retained its seat in the House of Representatives at the Legislature.

The Montserrado District #9 pending by-election is as a result of the death of CDC fallen lawmaker, Rep Munah Pelham Youngblood.

Born 22 September 1983, the late Representative Munah Evangeline Pelham Youngblood died in July this year in Accra, Ghana. Prior to her demise, the late Montserrado District #9 lawmaker who was a staunch member of the CDC and President Weah’s confidant, traveled across the world on extended leave of absence from legislative duties in search of treatment for an illness that lasted for a protracted period.

The Liberian leader assured supporters and partisans of CDC that he will personally lead a campaign for the party’s two candidates in Montserrado, Foko and Fallah to win at the polls on 8 December.

Although at a jam-parked sports stadium with health protocols being sparsely observed, President Weah used the occasion to reecho the National Elections Commission’s call for every Liberian to straightly observe Covid-19 health protocols during the political campaign period.

For his part, the CDC Montserrado senatorial candidate, who is also Montserrado District #5 lawmaker at the House of Representatives, Rep Thomas Fallah, urged partisans and supporters of the ruling party to ensure a violent-free campaign.

He used the event to appreciate president Weah for granting him the opportunity in 2005 to represent the people of Montserrado County District #5.

Representative Fallah among others vowed that if elected, he would not betray the trust and confidence of citizens and residents of Montserrado County.

Liberians in Guinea not in harm’s way – Information Minister Rennie