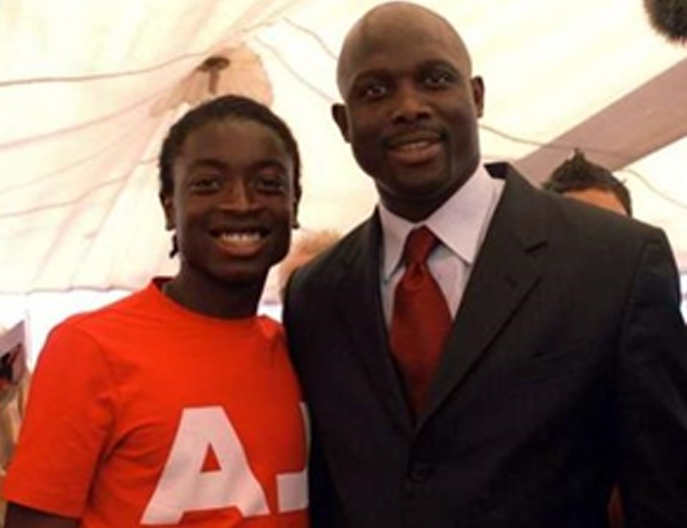 Born August 27, 1987, George Weah, Jr. is an American footballer who most recently played as a midfielder for Tours. He began in the A.C. Milan youth team, but after being released has played for a succession of teams around Europe. He was capped for the United States men’s national under-20 soccer team, but has no international caps at senior level.

Weah, Jr. holds both American and Liberian citizenship. He has also played in a handful of friendlies for the United States men’s national under-20 soccer team. He was called up by Liberia in June 2015 for the 2017 Africa Cup of Nations qualifier against Togo, despite not having played for a club since the previous year. He was sat on the bench for the full time as Liberia lost 2–1.

Weah Jr. was arrested by police in Paris on the night of Monday to Tuesday, while he was with seven other people in an apartment rented on Airbnb, according to reliable report made available to WVN.

The report indicates that at around 3:20 am, the police intervened in a building located on avenue du Président Wilson (8th) for a nighttime noise, and in the apartment were eight people, including Weah Jr., who were all fined for non-compliance with the measures in force related to the health context.

George Weah, Jr. according to the report, was one of the eight checked, with the report adding that the son of the Liberian president was very alcoholic, and that he attacked security officers, and was arrested for contempt and rebellion.

Following his arrest, the report states that George Weah, Jr. showed a diplomatic passport to the officials who summoned him to the police station on Thursday to verify that he did indeed benefit from immunity.

Weah Jr. nicknamed “Champ,” after he was born on the same day that his father led one of Liberia’s oldest clubs Invincible Eleven to the national championship was born onto President Weah and Liberia’s Jamaican-born First Lady Clar Marie Weah. He was born in Liberia, but was raised in the United States. Junior was one of three of Weah’s children to show an aptitude and interest in soccer at a young age. While Junior’s sister Tita chose to return to school to study, both Junior and his brother Timothy pursued professional soccer career.

He began his soccer career in the youth team of A.C. Milan at the age of 14, but was released in 2007 after long series of injuries shortly prior to turning 20. In October of 2007, he joined Slavia Prague on trial, but he was not offered a contract by the Czech side. At the time, Coach Karel Jarolím explained that the team was looking for a “different type of player” to Weah.

Weah Jr. briefly played for CS Romontois in Switzerland, before moving within the country to Wohlen. In 2011, he joined FC Baden, and on February 3, 2012, he moved to Kaliakra Kavarna on a one-and-a-half-year deal, after a successful trial with the Bulgarian A PFG club.

On May 17, 2014, he made his debut for Paris Saint-Germain‘s second team in the Championnat de France amateur, coming on as an 87th-minute substitute as his side lost 2–0 to RC Lens II. Junior played two games in total for the PSG amateur side.