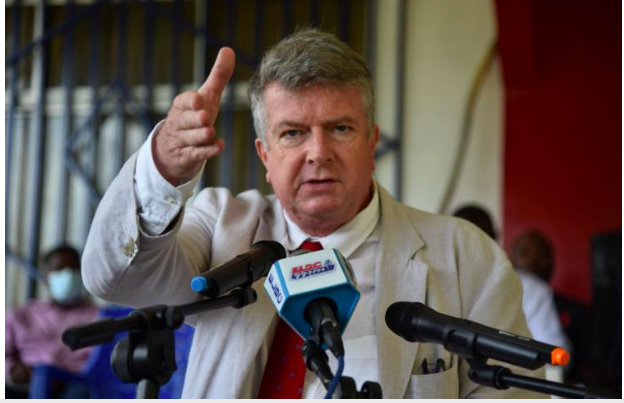 Ambassador Laurent Delahouse, Head of the European Delegation to Liberia, has outlined the major challenges confronting Liberia and other African countries, stating that the problem arises when officers in positions of power use that power for personal or political gain rather than for the purposes set out by law.

On January 28, 2022, at the Ministerial Complex in Monrovia, during the induction ceremony of officers elect of the Liberian National Bar Association, the European Envoy stated that his assertion is based on Transparency International’s Corruption Perception Index and other international indices.

“The challenge is when officers vested with power use that power to gain advantages for their private or other use, when the fruits of power are sold for personal or political gain rather than for the purposes set by the Law. This is the challenge that citizens of many countries face everyday, in Europe as well as in Liberia – probably less in Europe actually, according to the Corruption Perception Index published by Transparency International and other such international indicators”, he asserts.

The outspoken European Ambassador stated that he had tried to explain previously in his remarks, urging public authorities to never lose sight of their founding fathers and mothers’ ideal for free societies.

“Power is vested in officers of the state to serve the state and its residents,” he remarked, saying that one of the fundamental reasons of liberal democracies is to serve the public. “This is why state officers are referred to as “civil servants” or “Servants of the State,” he explained. “The chosen officers serve the group and its members, just as you, Ladies and Gentlemen, serve the LNBA and its members,” he stated of any group of human beings formed within a democratic framework and within the bounds of the Rule of Law.

He said these infringements on the Rule of Law, however minor and common, however explainable in some cases by many power bearers’ difficult financial situation, however tempting for party political or other reasons, are a hindrance to the State’s mission, an impediment to the country’s development, and a threat to democracy.

“You wish to live in a country like Liberia or Europe”, he said, “where the money provided by the government and development partners is used wisely and for the single reason for which it was taken from taxpayers or awarded by private donors: delivery to the people”. The European diplomat informed his audience previous meetings he had with the Liberian government to examine how they could collaborate to increase the accountability and effectiveness of development aid to Liberia.

The EU envoy stated that his position on human rights and accountability should not be interpreted as meddling, but rather as an act of trust in and respect for the universal ideals inscribed in the United Nations’ international legal corpus.

“This is not interference in the affairs of other States. It is an act of faith in and respect of the universal values enshrined in the international legal corpus of the United Nations. It is about respecting and nurturing our history, proudly remembering our foremothers and our forefathers who fought for our freedoms and for our rights. It is about raising our voices to promote and defend those universal rights and freedoms elsewhere in the world”.

Anyone living in Europe or Liberia, he said, would want to live in a country where the media is trusted to make things clear when a story on payment is published. He emphasized that enterprises must follow a set of regulations that are clear, stable, and transparent, with no exceptions, and on a level playing field, whether in Liberia or Europe.

“In Europe or in Liberia, you want to live in a country where electricity is provided to citizens under the rules and operations of the power company, not through illegal distribution or power theft”, he said.

He stated that, in the end, adherence to the Rule of Law starts with everyone of us, underlining that each of us has a unique responsibility, obligation, and integrity. Liberians should ask themselves how they can contribute to cherishing, nurturing, and improving the free and vibrant democracy that their forefathers strived for, fought for, and died for in Liberia every day and in tiny ways, he said.

He stated that it is our collective responsibility as citizens of free states to speak up when democracy, human rights, and fundamental freedoms are threatened elsewhere. Human rights are universal, meaning that they apply to everyone, from the tiniest town to the entire world. They are the property of every human being. They are inextricably linked to the birth of every new infant, whether in Liberia, Europe, America, or China.

Delahouse said he was humbled to note that, in President George Manneh Weah’s own words, “Liberia will remain a pillar of democracy on the African continent, availing its willingness to remain a part of the global coalition in defence of democracy in the world,” as stated in His Excellency’s Annual Message to Congress on Monday. He applauded Liberia’s leadership for its contributions to ECOWAS in preserving and restoring peace, security, stability, democracy, and constitutional order in Guinea, Mali, and now Burkina Faso. “In this endeavour, the European Union and its Member States stand by your side”, he said.

He praised the Liberian National Bar Association for its critical role in making justice more accessible to all Liberians, as stipulated by in Bar’s Constitution, because many Liberians still lack the financial or practical means to make their way through the legal system. He stated that the NBA serves a critical role in monitoring the judicial system’s integrity, independence, and transparency in Liberia in order to restore public confidence and faith in the system.

At the same time, Ambassador Delahouse stated Liberians’ attitude toward the concept of justice, as seen by an outsider like himself, reveals something he would call a “culture and economy of litigation” that is strange to many Europeans, at least to him as a Frenchman. He said he wants to be proven wrong when he gets the impression that the political dialogue is currently taking place more in court over legal arguments than in communities over electoral manifestos. He believes it is a cultural feature resulting from Liberia’s past and possibly unique ties to the United States. However, he stated that it was more necessary for the judicial system to demonstrate its effectiveness in resolving disputes.

He thanked the Liberian National Bar Association for providing him with the opportunity for this discussion, and he thanked the former President, Cllr. Tiawan Gongloe, and his team for their important work in facilitating access to justice for all Liberians, as well as for being an active and critical voice in the public debate. He praised Cllr. Gongloe’s personal example of seeking to preserve the LNBA budget’s financial interests while performing his duties, as well as to encourage freedom of expression and internal democracy inside the Bar Association.

He welcomed Cllr. Sylvester Rennie, the new President of the Liberian National Bar Association, and the rest of the National Executive Council’s new members, and challenged them to uphold Cllr. Gongloe’s high standards in making the Liberian National Bar Association’s management an example of good governance, as well as in always working for an independent, efficient, and transparent judiciary. He wished them well in their critical mission of ensuring that all Liberians have access to justice and the rule of law.