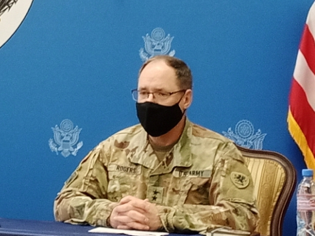 Major General Paul Rogers, the Adjutant General of the Michigan Army, has stressed that women’s involvement in the military strengthens the Armed Forces of Liberia (AFL).

Maj. General Rogers stated that women offer strength and enrichment to any organization, and that the Michigan Army and the AFL are both actively attempting to recruit more women.

He made these statements on Tuesday, February 8, 2022 at a press conference held at the US Embassy in Monrovia.

General Rogers, speaking on the State Partnership Program, the Michigan National Guard, and the AFL, said he is proud of the AFL’s current recruitment efforts, which are aimed at enlisting more women.

He said that the Chief of Staff of the AFL, Major General Prince Johnson, told him that the AFL needed 300 more soldiers to add up to the current number, half of whom were women.

According to him, the State Partnership Program has built mutually beneficial relationships between the US States National Guard and the AFL for more than 25 years, and has successfully established partnerships with 89 nations around the world.

Maj. General Rogers indicated that the program is administered by the National Guard Bureau, which is guided by the Department of State’s foreign policy goals and assisted by the State Adjutants General in support of combatant commanders and the US Chief of Mission security cooperation objectives and department of Defense policy goals.

He also said that the Michigan National Guard-Liberia partnership was established in 2009 and has been flourishing and growing ever since, adding, “the partnership has achieved more training programs and partnerships as they continue to foster a very healthy exchange.”

Additionally, Maj. General Rogers noted that the US government has trained more than 2,000 AFL personnel (civilian and military combined) and is assisting the Government of Liberia in its efforts to build and maintain a political and professional military force as well as providing emergency medicine mentorship, which is part of the ongoing effort.

“We are in the business of building the future together, and a well-funded and trained military is essential for Liberia and the region’s long-term stability,” he said.

The Maj. General Rogers praised the personnel of the AFL and added that “they are professional women and men who are committed to the defense of Liberia and they have an interest in helping West Africa in the peacekeeping operation in Mali, Sudan, and they are really making significant progress there.” He claimed that AFL troops’ professionalism was what he witnessed when training in Michigan with their top US military professionals, who noticed their potential and quickly invited them to join and be a part of their training to prepare them to go to Africa and excel in their mission.