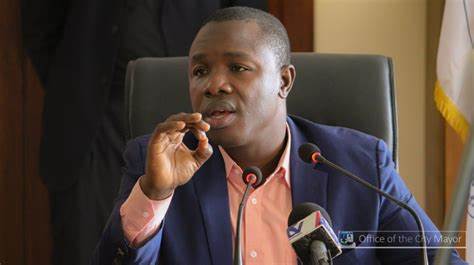 The Secretary General of the Congress for Democratic Change, Jefferson Koijee, has questioned the sincerity of those calling for a protest on December 17 under the banner “We are tired of suffering.”

According to Mayor Koijee, the protesters are living examples of Liberia’s painful past, and as such, they should be concerned with repentance rather than protest.

“Who is calling for a protest?” People like Lewis Brown, a certified serial killer who served as an advisor to a regime responsible for the heinous and ruthless murder of defenseless citizens. Lewis Brown requested Senator Milton Teahjay’s decapitation after Teahjay criticized the state’s resource looting in the state’s south-eastern region. “Or is this the same Lewis who served as Information Minister for a government that pillaged Liberia’s resources for 12 years in a row?”

Lewis Brown’s call for a “we are tired of suffering protest” while living lavishly in the state after years of mass looting, according to Mayor Koijee, is an insult to the Liberian people.

Mayor Koijee made the claim at a recent CDC press conference in Monrovia. He claimed that Amb. Brown is a convicted murderer who needs to repent.

During Liberia’s 14-year civil war, Mr. Brown requested the head of J. Milton Teahjay, who is now a senator in Sinoe County, according to the Mayor. According to the Mayor, Teahjay spoke out against Taylor’s regime stealing money from state coffers.

“Brown served as Charles Taylor’s security advisor at the time he wanted to kill Teahjay,” Koijee claimed. “Teahjay fled to New Kru Town, where he was rescued by the people of Kru Town.”

“Repent, Lewis Brown,” said the newly elected Secretary General of the CDC, urging the former Information Minister to rally bishops and priests across the country to pray for his repentance rather than rallying people to protest the CDC government.

He stated that Amb. Brown should not use the opposition party, the Alternative National Congress (ANC), to demonstrate his rebellious nature.

The Major stated that Amb. Brown should seek forgiveness from God for the alleged wrongdoings he committed in the country rather than putting people in the street in the name of a suffering protest scheduled for December 17 of this year.

At the same time, Mayor Koijee acknowledged that things are not going well in the country, but he stated that the President should not be held responsible for the hardships that Liberians are facing.

The allegations leveled against Lewis Brown, Charles Taylor’s former security advisor, appear to be out of whack, as the “we are tired of suffering” protest appears to be dying on the vine, with no momentum just five days before its scheduled date.

Many Liberians believed that the organizer of the “We Tired of Suffering” protest was a poor messenger and that his planned protest was illegitimate.

On December 1, 2022, Team Cummings’ chairman announced that a large protest would be held to draw the attention of the government to what it called the “harsh suffering” that Liberians were experiencing at the time.